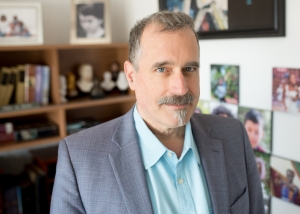 WNCG professor Alan Bovik has been named the recipient of the 2022 Edison Medal from the Institute of Electrical and Electronics Engineers (IEEE) for "pioneering high-impact scientific and engineering contributions leading to the perceptually optimized global streaming and sharing of visual media.”

The Edison Medal is IEEE’s oldest medal, and it is awarded for meritorious achievement in electrical science, electrical engineering, or the electrical arts. The IEEE Edison medal was first given to Elihu Thompson in 1909, and recipients since then include Nikola Tesla, Alexander Graham Bell, Robert Millikan, Esther Conwell, Vladimir Zworykin, Nick Holonyak, Ray Dolby, and Ursula Keller. Archie Straiton, also of Texas ECE, won the award in 1990.

The award consists of a gold medal, a bronze replica, a certificate, and honorarium. It will be presented to Prof. Bovik on May 6, 2022, at the IEEE Vision, Innovation, and Challenges Summit & Honors Ceremony in San Diego.

“It’s humbling to join the amazing people who have been honored by the IEEE Edison Medal in the past," said Bovik. "It is also gratifying that my decades-long vision has been realized, of a digital world of pictures, videos, and cinema, perceptually optimized by modeling the visual brain to obtain tremendous efficiencies and the best possible viewing experiences. Many UT grad students have helped fulfill this dream, and today, our algorithms, based on principles of modern visual neuroscience, process and control most data traveling over the Internet. UT Austin has always been an ideal research environment, with visionary leaders, brilliant collaborators, and exceptional staff. Companies like Netflix, Facebook, Amazon, YouTube, Intel, and Cisco, have kindly supported our efforts and used our ideas in their workflows for many years. I look forward to 38 more years working with students on these adventurous and challenging problems as we enter the “Metaverse!”

Prof. Bovik, an Honorary Fellow of the Royal Photographic Society, holds the Cockrell Family Endowed Regents Chair in Engineering at The University of Texas at Austin, where he is Director of the Laboratory for Image and Video Engineering (LIVE).

He and his students have twice been recognized by the Academies of Television and Arts & Sciences, with a Technology & Engineering Emmy® Award in 2020, and a Primetime Emmy® Award for Outstanding Achievement in Engineering Development in 2015.

His research interests lie at the confluence of video engineering and visual neuroscience, where he is well known for creating perception-based models and algorithms for predicting or improving the visual quality of images and videos. He has published more than 1,000 papers in related fields, which have been cited more than 120,000 times in the open literature.

He has received numerous awards and accolades for his contributions. In 2019, he was awarded the Progress Medal by the Royal Photographic Society, the oldest and most prestigious honor in the field of photography.