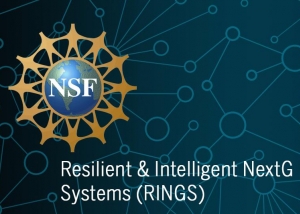 The RINGS program seeks to accelerate research in areas that will potentially have significant impact on emerging Next Generation (NextG) wireless and mobile communication, networking, sensing, and computing systems, along with global-scale services, with a focus on greatly improving the resiliency of such networked systems among other performance metrics.

Next-generation learning systems enabling applications in, e.g., healthcare, energy, banking, augmented/virtual reality and car/robot navigation, will be privacy-driven, distributed and large-scale, resulting in substantially increased exposure to network congestion/failures. A typical scenario is one where a substantial number of entities (clients, organizations, communities thereof) participate in a learning task; each of these entities owns, has access to, or generates part of an overall data set which would be impractical or undesirable to gather at a central location. While the entities benefit from a collaboration, especially in settings where the amount of local data is relatively small and thus the ability of an entity to learn a model on its own is limited, such a collaboration requires major network resources.

This research project centers on developing new, as well as expanding traditional, engineering principles for the design of resilient and scalable networked learning systems. To this end, we will investigate interrelated themes spanning the development of theoretical underpinnings, network architecture, applications and protocol design.

Dr. Gustavo de Veciana is the Cockrell Family Chair in Engineering #18 and the Associate Chair for Faculty Affairs in the Department of Electrical & Computer Engineering at The University of Texas at Austin. He is a recipient of a 1996 National Science Foundation CAREER Award, was an Editor for IEEE/ACM Transactions on Networking, and a co-recipient of the IEEE/CAS William J. McCalla ICCAD Best Paper Award, 2000. He was elevated to IEEE Fellow status in 2009.

Dr. Haris Vikalo is a professor and holds the William W. Hagerty Fellowship in Engineering in the Department of Electrical and Computer Engineering at The University of Texas at Austin. In 2009, Dr. Vikalo was awarded the NSF CAREER award. His research interests include signal processing, machine learning, bioinformatics, and communications.