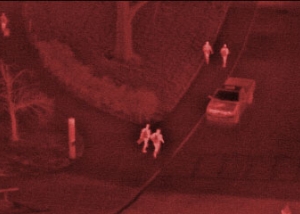 While much work has been done to further image quality for cameras and smart phones in the visible light spectrum, WNCG student Todd Goodall and his advisor Prof. Bovik have expanded their research to include the quality of infrared images.

“As far as Prof. Bovik and I know, no one has thoroughly studied the natural scene statistics of infrared images,” Goodall states. “Other general image statistics have been studied, but no one has considered the perceptually-relevant natural statistics..”

Though the name might sound misleading, natural scene statistics refer to statistical regularities that occur in all photographed images, not just pictures of trees and grass. While some research has captured these statistics for infrared images, it is not nearly as in-depth as the work regarding visible-light images.

“Infrared images are less detailed, smoother and blurrier than normal visible-light images you take with your smart phone,” Goodall mentions.

“The goal of my research is to understand how various infrared image distortions behave to measure and improve perceptual quality,” Goodall states. “Non-uniformity and Halo Effect distortions are difficult to measure. Especially when both are present.”

So far, Goodall notes success in detecting the level of non-uniformity noise in the presence of other noise.

“Without knowing what originally distorted the infrared image, natural scene statistics can help determine how far an image is from a pristine state,” Goodall says.

The applications for these statistical models are widespread. For example, they can be used to predict image quality and to predict visibility of camera targets. If a user points a camera at a scene, the camera can adjust its settings to take the best picture according to the task required. This type of targeting functions like an autofocus feature on visible-light cameras.

Currently, Goodall is working to consolidate his research into an upcoming journal paper that explains infrared imaging distortions. His research is funded by the National Institute of Standards and Technology.