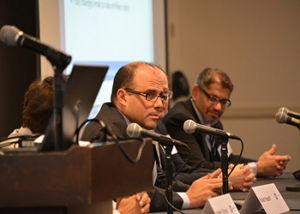 In 2013, 32,719 fatalities resulted from traffic crashes, most of which were caused by driver error. Across the globe, people are facing longer commutes and five Texas communities are in the top 26 most congested cities in the United States. Traffic congestion creates about 4.8 billion hours of travel delay and affects the environment through increased carbon footprints and higher fuel consumption.

With these growing safety, reliability and environmental concerns, as well as an increased desire for consumers to multi-task with communication gadgets, the need for Intelligent Transportation Systems (ITS) and solutions has never been greater.

ITS seek to incorporate self-driving, connected vehicles into the mass market that can communicate with one another and transportation infrastructure, as well as redesign signal systems, improve passenger safety, reduce congestion and create environmentally sustainable ways to commute. Goals of ITS include designing vehicles that cannot crash, improving transit times, reliability and efficiency in transportation and creating a transportation network free from carbon emissions.

In the quest for ITS solutions, UT Austin formed the Data-Supported Transportation Operations and Planning Center (D-STOP), a collaborative initiative between researchers in the Center for Transportation Research (CTR) and the Wireless Networking and Communications Group (WNCG). Named a Tier-1 US Department of Transportation (USDOT) University Transportation Center, D-STOP is dedicated to finding solutions to modern-day transportation challenges.

To explore the potential and challenges of ITS, D-STOP members met last Monday at the inaugural D-STOP Symposium. Held at UT Austin, the Symposium brought together visitors from industry, academia and public agencies to discuss pathways to a connected and autonomous transportation world and the future of autonomous vehicles.

“It is through such collaborations that innovation sparks start flying to address vital issues of the future,” CTR Director, Prof. Chandra Bhat stated. “Collaboration is what feeds the dynamic interplay of thoughts. We are invested in a collaborative approach, not just within the University, but beyond, with industry and public agencies.”

“This initiative will be a transformational opportunity across the globe,” TxDOT Deputy Executive Director, John Barton, stated. “It will change transportation, how we manage our systems, and what we do to develop and deliver these services to the public. TxDOT is proud to be involved and to partner with universities, industry and the public to thoughtfully consider how to move forward with ITS solutions.”

Many challenges still lie in the way of a future full of vehicles driving without the limitations of traffic signals, lanes, or a driver.

First, human reactions to new technology can be difficult to predict and change. According to CTR Prof. Stephen Boyles, it takes an average of 16 years for a new technology product to be introduced into the American car market. Certain features intended for safety can also cause humans to drive more recklessly.

“The representation of human behavior is an important issue,” Prof. Bhat stated. “How might humans adapt to these technologies and what might be the unintended consequences? For example, airbags, as an engineering effect, save lives and reduce injury. However, after airbags were introduced, humans adapted by driving more aggressively.”

According to Prof. Bhat, it is important to understand human patterns of behavior and to design ITS solutions that respond to human needs and create a sustainable transportation solution. The introduction of autonomous vehicles could affect commute times and distances, as well as urban and suburban community planning, Prof. Bhat mentioned.

Other D-STOP speakers, including WNCG Data Sciences faculty, focused on the role of Big Data in answering the demands of future transportation needs. Acquiring access to data and interpreting large amounts of data about commuters are two challenges facing industry and academia on the path to connected and autonomous vehicles.

There are huge amounts of data that need to be mined, Prof. Boyles mentioned, but access to the types of data needed to make decisions is not always available.

Securing data once accessible created another hot discussion topic throughout the day, especially as it relates to hijacking and privacy concerns.

“How to keep data secure is not just a policy issue, it’s a technology and methodology issue as well,” McCombs Prof. Doug Fearing stated. “The reason much data is not available is because it’s personal. The question is how to allow companies to share data with the government and researchers in a way that’s completely anonymous.”

To collect this data as well as build the connected future required by autonomous vehicle technology, WNCG Prof. Robert Heath discussed the need for more bandwidth and faster data rates. According to Prof. Heath, millimeter wave (mmWave) spectrum would provide high data rates and reduce delays in communications between cars, and between cars and the infrastructure.

“We need higher data rates to bring the autonomous vehicle world to reality,” Prof. Heath stated. “Connected vehicles will need gigabit-per-second data rates, which are not supported by current technology. For this, we will need mmWave, which is already in use in automotive radar.”

Increased data rates would allow fully autonomous vehicles to share their sensor data with each other and with the infrastructure network, Prof. Heath mentions. This would allow vehicles to take advantage of the sensor data generated around them and respond accordingly.

“Vehicle-to-Vehicle, Vehicle-to-Infrastructure and Vehicle-to-Pedestrian all require communication links,” WNCG alumnus and Samsung representative, Dr. Tom Novlan, stated. “Not just a single system, or single provider links, but an entire ecosystem, a network that manages traffic and services. This ecosystem has many pieces that need to integrate and work together.”

To develop this ecosystem, according to Dr. Novlan, collaboration, standardization and partnerships between different manufacturers and software providers are necessary.

“The Google car has now driven 770,000 miles without an accident caused by the Google car,” WNCG Prof. Joydeep Ghosh stated. “The challenge is to recreate this success at a large-scale and in the intermediate phase, where most infrastructure and current cars do not have the capability to support autonomous vehicles.”

The D-STOP Symposium closed with an invitation to form an advisory board of thought leaders from across disciplines to develop partnerships and create a standardized and connected system for both the intermediate phase and the future.

Joydeep Ghosh is currently the Schlumberger Centennial Chair Professor of Electrical and Computer Engineering at The University of Texas at Austin.

Dr. Sriram Vishwanath is a Professor in the Electrical and Computer Engineering department at The University of Texas at Austin.

Sanjay Shakkottai is a Professor and is the Temple Foundation Endowed Professor No. 3 in the Department of Electrical and Computer Engineering at The University of Texas at Austin.

Sanjay Shakkottai received his Ph.D. from the ECE Department at the University of Illinois at Urbana-Champaign in 2002. He received the NSF CAREER award in 2004, and elected as an IEEE Fellow in 2014. His current research interests include network architectures, algorithms and performance analysis for wireless networks, and learning and inference over social networks.

Dr. Constantine Caramanis is a Professor and holds the William H. Hartwig Fellowship in Electrical Engineering in the Department of Electrical & Computer Engineering at The University of Texas at Austin.