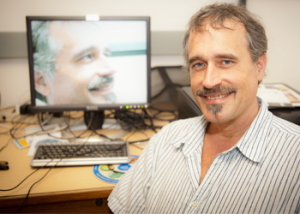 Professor Al Bovik, holder of a Cockrell Family Regents Chair in the Wireless Networking and Communication Group and the Department of Electrical and Computer Engineering in the Cockrell School of Engineering at The University of Texas at Austin, has received a $450,000 grant over three years from the National Science Foundation (NSF) entitled “Tasking on Natural Image Statistics: 2D and 3D Object and Category Detection in the Wild.”

The goal of this project is to develop “distortion-aware” computer vision models and algorithms suitable for today’s mobile camera devices, using new and emerging models of visual neuroscience (how people see) and detailed and accurate statistical models of the 3-D visual world (called natural scene statistic models). Specifically, this project seeks ways to incorporate natural scene statistic models into highly sophisticated computer vision algorithms for object detection and categorization, and three-dimensional scene understanding. Success in this endeavor will greatly accelerate efforts to create smart cameras for consumer use that can find and recognize objects and street scenes in the 3-D world, under poor, low-light or moving conditions, even when in the hands of inexpert, unsteady consumer users. Many other camera devices would find similar significant improvement, including low-cost surveillance and security cameras and mobile medical camera devices.

Prof. Bovik is a Fellow of the IEEE, a Fellow of the Optical Society of America (OSA), a Fellow of the Society of Photo-Optical and Instrumentation Engineers (SPIE), and is a member of the National Academy of Television Arts and Sciences (NATAS). He has received many industry and academic honors including the IEEE Signal Processing Society "Society" and Technical Achievements Award, the SPIE Technology Achievement Award and the IS&T Honorary Member Award. He is also this year’s recipient of the UT-Austin Cockrell School of Engineering Joe J. King Professional Engineering Achievement Award.

He is well known for his many contributions to the fields of image and video processing, vision science, and computational vision. He has published over 750 technical articles in these areas and holds several U.S. patents. His publications have been cited about 40,000 times in the open literature, his current H-index is in the 70s, and he is listed as a Highly-Cited Researcher by Thompson Reuters, indicating one of the top 1% of most-cited researchers within the field of Engineering. He is also the author of The Handbook of Image and Video Processing, Second Edition (Elsevier Academic Press, 2005), Modern Image Quality Assessment(Morgan & Claypool, 2006), The Essential Guide to Image Processing (Elsevier Academic Press, 2009), and The Essential Guide to Video Processing (Elsevier Academic Press, 2009).