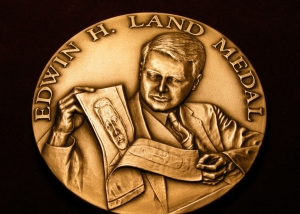 WNCG Prof. Alan Bovik received the 2017 Edwin H. Land Medal from The Optical Society (OSA) for shaping the direction and advancement of modern perceptual picture quality theory, and for partnering with industry towards transforming his ideas into global practice.

The medal was established in 1992 by the OSA and the Society for Imaging Science and Technology to honor Edwin H. Land and to recognize his unique career as scientist, technologist, industrialist, humanist and public servant. The medal recognizes pioneers in scientific research whose work has enabled new inventions, technologies, and products.

Prof. Bovik’s image and video quality measurement tools are used throughout the photographic, television and film industries. He has published over 800 technical articles on image and video processing, digital television and cinema, computational vision, and visual perception. He holds several U.S. patents and is among the top one percent of highly cited engineers in the world, according to Thomson-Reuters.

Prof. Bovik holds the Cockrell Family Endowed Regents Chair in Engineering at UT Austin, where he is a member of WNCG, Director of the Laboratory for Image and Video Engineering, and faculty member in the Department of Electrical and Computer Engineering and the Institute of Neuroscience.

He co-founded and served as Editor-in-Chief of the IEEE Transactions on Image Processing. In 2015, he received a Primetime Emmy Award for Outstanding Achievement in Engineering Development for his work on the development of video quality prediction models that have become standard tools in broadcast and post-production houses throughout the television industry.

The Edwin H. Land Medal is endowed through the OSA Foundation by contributions from OSA, the Society for Imaging Science and Technology, the Polaroid Foundation, the Polaroid Retirees Association and other individual contributors, including Manfred Heiting, Theodore Voss, and John J. McCann.