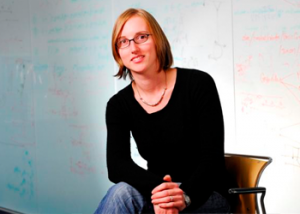 In modern society, robots and humans are becoming increasingly integrated. Already, robots assist people in factories, hospitals and households, as well as share the roads. These collaborations raise demands for technological innovation and research to develop and enable friendly robots that can work effectively with, for and around people.

For her significant contributions to these human-robot interactions, Prof. Andrea Thomaz recently received the 2017 Toshio Fukuda Young Professional Award at the IEEE International Conference on Robots and Systems (IROS). The award, which honors Professor Fumio Harashima, the Founding Honorary Chair of the IROS conferences, recognizes the outstanding contributions of an individual who has pioneered activities in robotics and intelligent systems.

The 2017 IEEE IROS Conference was held in Vancouver, Canada this September, and focused on a theme of “Friendly People, Friendly Robots.”