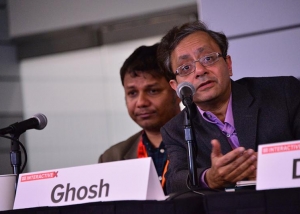 WNCG professor Joydeep Ghosh has been named a recipient of the 2020 IEEE ICDM Research Contributions Award. The award is the highest recognition for research achievements in Data Mining, and is annually given to one individual or one group who has made influential research contributions to the field of Data Mining.

Dr. Ghosh joined Texas ECE in 1988. He is the founder-director of IDEAL (Intelligent Data Exploration and Analysis Lab) and a Fellow of the IEEE. Dr. Ghosh has taught graduate courses on data mining and web analytics every year to both UT students and to industry, for over a decade.

He has published more than 400 refereed papers and 50 book chapters, and co-edited over 20 books. His research has been supported by the NSF, Yahoo!, Google, ONR, ARO, AFOSR, Intel, IBM, and several others. He has received 14 Best Paper Awards over the years, including the 2005 Best Research Paper Award across UT and the 1992 Darlington Award given by the IEEE Circuits and Systems Society for the overall Best Paper in the areas of CAS/CAD. Dr. Ghosh has been a plenary/keynote speaker on several occasions such as ICDM'13,(Health Informatics workshops at) KDD14, ICML13 and ICHI13; MICAI'12, KDIR'10 and ISIT'08, and has widely lectured on intelligent analysis of large-scale data. He served as the Conference Co-Chair or Program Co-Chair for several top data mining oriented conferences, including SDM'13, SDM'12, KDD 2011, CIDM’07, ICPR'08 (Pattern Recognition Track) and SDM'06. He was the Conf. Co-Chair for Artificial Neural Networks in Engineering (ANNIE)'93 to '96 and '99 to '03 and the founding chair of the Data Mining Tech. Committee of the IEEE Computational Intelligence Society. He has also co-organized workshops on health informatics, high dimensional clustering, Web Analytics, Web Mining and Parallel/ Distributed Knowledge Discovery.

Dr. Ghosh has served as a co-founder, consultant or advisor to successful startups (Accordion Health, Stadia Marketing, Neonyoyo and Knowledge Discovery One) and as a consultant to large corporations such as IBM, Motorola and Vinson & Elkins.

Dr. Ghosh has served as program or conference co-chair for the top data mining conferences, and also keynoted at such venues, including at ICDM 2013 (Dallas), where he made it despite much of the city shutting down because of an unprecedented ice-storm! At the University of Texas, he has received several "Best Professor" awards from students (most recently in 2019), and graduated 43 PhD students, with many of them securing tenured or tenure-track positions in academia (including the University of Illinois at Urbana-Champaign, University of Minnesota, Emory University, University of Southern California, and University of Alberta) or top positions in industry. He also has extensive direct collaborations with industry, ranging from the usual tech titans to data mining startups. In particular, for the past three years, he has been serving as Chief Scientist of CognitiveScale, which was selected in 2018 to be among the 61 technology pioneers worldwide (across all industries) by the World Economic Forum, for its efforts in developing trustworthy machine learning solutions.

Joydeep Ghosh is currently the Schlumberger Centennial Chair Professor of Electrical and Computer Engineering at The University of Texas at Austin.