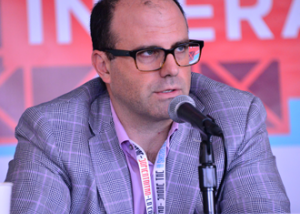 Prof. Robert Heath of Texas ECE along with his former students Jeonghun Park, Chan-Byoung Chae and their co-author Min Soo Sim have received the 2018 Journal of Communications and Networks Best Paper Award. The winning paper was “Compressed Channel Feedback for Correlated Massive MIMO Systems” that appeared in the February 2016 regular issue of the Journal. The award will be be presented during the Award Luncheon at ICC 2018, May 21, in Kansas City.

Robert W. Heath Jr. is a professor in the Department of Electrical and Computer Engineering. He holds the Cullen Trust for Higher Education Professorship in Engineering #6 and is a fellow of the Institute of Electrical and Electronics Engineers. Heath’s research is in the area of wireless communication and signal processing, with specific focus on millimeter-wave communication, 5G cellular and all aspects of MIMO (multiple-input multiple-output) communication systems. He is a member of the Cockrell School’s Wireless Networking and Communications Group; CEO of MIMO Wireless Inc., a consulting company focusing on multiple antenna wireless communication systems; and chief innovation officer of Kuma Signals LLC, an engineering firm focusing on wireless communications. Heath is the author of two books, co-author of one book and the recipient of numerous national and international best paper awards. He has been named a highly cited researcher in computer science and engineering for the past four years. He was named to the National Academy of Inventors in 2017.

Jeonghun Park is a Senior Engineer at Qualcomm. He received his PhD from Texas ECE in 2017.

Chan-Byoung Chae is the Underwood Distinguished Professor in the School of Integrated Technology, College of Engineering, Yonsei University, Korea, where he directs the Intelligence Networking Laboratory. He was a Member of Technical Staff at Bell Laboratories, Alcatel-Lucent, Murray Hill, NJ, USA from 2009 to 2011. Before joining Bell Laboratories, he was with the School of Engineering and Applied Sciences at Harvard University, Cambridge, MA, USA as a Post-Doctoral Research Fellow to work with Vahid Tarokh. He received the Ph. D. degree in Electrical and Computer Engineering from The University of Texas (UT), Austin, TX, USA in 2008 under the supervision of Robert W. Heath, Jr., where he was a member of the Wireless Networking and Communications Group (WNCG).

Min Soo Sim is a graduate student at Yonsei University specializing in next generation wireless networks.