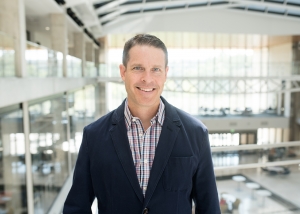 Professor Todd Humphreys took the helm as director of the Wireless Networking and Communications Group last fall. Now that the group has launched into another school year, we sat down with Prof. Humphreys as he reflected on the past year as well as what's to come:

Q: How has your first year as director been? What are some of the things you're most excited about?

My first year as director of WNCG has been thrilling. Our efforts have been focused on launching the new 6G@UT center, which will sit organizationally under the WNCG umbrella (all 6G@UT affiliates are automatically WNCG affiliates) but will also include a few faculty outside WNCG. Led by Dr. Jeff Andrews, 6G@UT aims to get an early start identifying and developing theory and technologies that will shape 6G and distinguish it from 5G.

Establishment of 6G@UT has brought a palpable sense of renewed vigor and purpose to WNCG, and the effort has attracted several key new affiliates who want to join us in the creation of 6G technologies: NVIDIA, Ericsson, Nokia, Tektronix, Viavi, MITRE, and soon Stellantis. Among academics, government officials, and technologists with an interest in wireless, the lessons of 5G were clear: to have impact on the next generation of wireless technology, you must innovate early and often, and you must not only attract top talent but develop partnerships that ensure a steady supply.

Q: As an interdisciplinary center, WNCG brings together faculty from a variety of departments on campus, though our previous directors have been based in Electrical and Computer Engineering. What's it like being the first WNCG director hailing from the Aerospace Engineering department?

It's an index of the growth and diversity of WNCG that it should eventually have a director from outside the ECE department. But the truth is that I've never felt like an outsider in WNCG. Much of what makes aerospace engineering so compelling right now is the growth of so-called "new space" technology, led by massive communications constellations in low-Earth orbit such as SpaceX's Starlink. So aerospace is very much in the wireless business!

Q: In what ways and in what directions do you see WNCG growing in the near future?

Since 2012 when I joined WNCG, we've grown 50% in terms of faculty, students, and affiliates. My primary focus as director will be to manage the growth of WNCG so that we reap the benefits of scale while retaining the characteristics that have been key to WNCG's becoming a preeminent wireless center: (1) the camaraderie among faculty and students that has made participation in WNCG joyful, (2) meaningful collaboration with affiliates on projects of mutual interest, and (3) excellent, high-impact scholarship.

Going forward, I see WNCG providing a stable organizational foundation on which ad-hoc initiatives and centers, like our new 6G@UT center, can quickly be built.

Dr. Humphreys specializes in the application of optimal detection and estimation techniques to problems in satellite navigation and communication, autonomous systems, and signal processing. His recent focus has been on assured perception for autonomous systems, including navigation, timing, and collision avoidance, and on low-Earth-orbiting satellite mega-constellations. Besides being director of WNCG, Dr.