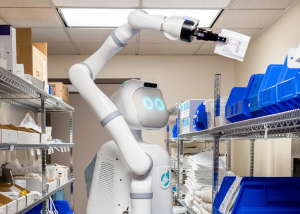 WNCG in the media
Diligent Robotics

Diligent Robotics, a healthcare technology company founded by WNCG professor Andrea Thomaz, is on the forefront of the fight against COVID-19. As highlighted in Forbes, robots like Diligent's Moxi are increasingly being used for essential functions in the patient-care setting.

Andrea Thomaz is an Associate Professor and holds the William J. Murray, Jr. Fellowship in Engineering #3 in the Deaprtment of Electrical and Computer Engineering at The University of Texas at Austin.