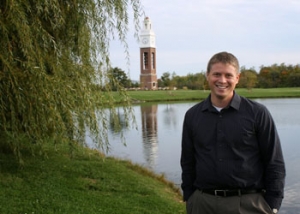 WNCG student Ken Pesyna was selected as a 2015 Marconi Society Paul Baran Young Scholar. The award recognizes Pesyna’s academic achievements and leadership in the field of communications and information science. Pesyna was selected because his outstanding work in centimeter-accurate and power-efficient smartphone positioning, his excellent academic record and his demonstrated entrepreneurial capabilities.

“Marconi Young Scholars are individuals we believe will make a real difference in science and society, serving as role models and an inspiration for others,” Robert Tkach, Marconi Fellow and chairman of the Young Scholar selection committee writes.

The Marconi Society was established in 1974 by the daughter of Guglielmo Marconi, the Nobel Laureate who invented radio. The organization promotes awareness of key technology and policy issues in telecommunications and the Internet and recognizes significant individual achievements through the Marconi Prize.

The Young Scholar Award will be presented to Pesyna during the Marconi Society Awards Dinner at the Royal Society in London on October 20, 2015. The dinner brings together Marconi fellows, information and communication scientists from across the globe and Young Scholar awardees from previous years.

In addition to recognition from the Marconi Society, the Paul Baran award comes with a $4,000 cash prize and up to $1,000 to cover travel expenses to and from the event. Winners are selected by an international panel comprised of engineers from leading universities and companies.

“Ken’s work on centimeter-accurate and power efficient GPS may have turned conventional wisdom about this field on its head. His ability not only to develop a new theory but to prove it in practice is truly impressive. Ken is on track to make breakthrough contributions in our field.”

Over the last year, Pesyna, who will graduate from WNCG with a PhD in the fall of this year, has made waves in the research community and wider media outlets for his groundbreaking discoveries in centimeter-accuracy for mobile devices. With fellow WNCG students and members of UT Austin’s Radionavigation Laboratory, Pesyna recently founded Radiosense, a startup company that brings precise positioning for mobile devices to the mass market. His work has also attracted the attention of WNCG Industrial Affiliate Samsung, a leading smartphone company with a big stake in virtual reality technology.

Pesyna’s work makes use of a special part of the GPS signal that, if used correctly, can provide centimeter or even sub-centimeter positioning accuracy. Such accuracy is required for augmented and virtual reality, autonomous and semi-autonomous vehicles and mapping. These technologies require that movements be tracked minutely. In the case of autonomous vehicles, such accuracy is needed to keep a car positioned in the lane and to determine its proximity to other cars, even in bad weather when Radar and vision systems might suffer.

To accomplish this precise positioning, Pesyna had to identify and overcome the obstacles in current smartphone technology. Contrary to conventional wisdom, Pesyna demonstrated that the biggest challenge in achieving centimeter-accurate GPS positions with a smartphone was not power consumption or GPS chip limitations, but the relatively poor grade of antennas used in these devices.

“Centimeter-accurate GPS comes with a ‘gotcha,’” says Pesyna. “The time it takes for the phone to find your initial position is significantly longer than for standard meter-accurate GPS—as much as five minutes. No one wants to wait that long.”

Pesyna discovered that just by moving the phone slightly back and forth he could reduce this time by half. By combining measurements from the GPS receiver with visual reference points from the smartphone’s camera to approximate the motion, Pesyna reduced the initial positioning to about one minute. He also discovered ways to make the algorithm for centimeter-accurate GPS more energy efficient and less draining on a smartphone battery.

At WNCG, Pesyna is jointly advised by Profs. Todd Humphreys and Robert Heath.

“Ken has laid the technical foundation for a revolution in our field of positioning, navigation and timing,” WNCG Prof. Todd Humphreys states. “Low-cost centimeter-accurate positioning is viewed by many as the next big thing in our field.”

According to Prof. Heath, Pesyna is not only an extraordinary researcher, but also has the drive to be a successful entrepreneur.

“I am both excited and humbled to receive this award,” Pesyna states. “I want to thank my advisors for their support and guidance over the years. They encourage me not only to develop new theory and algorithms, but also encourage the testing of these theories in real-data, real-world situations. I also want to thank the Marconi Society for the award, which encourages young people at the beginning of their careers. I look forward to meeting the other Young Scholar winners and winners of the prestigious Marconi Prize at the awards dinner in October.”