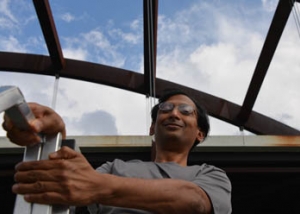 Prof. Sanjay Shakkottai received a 2017 Qualcomm Faculty Award. The award supports key professors and their research at leading universities across the country. This program connects Qualcomm with top academic researchers in hardware, software, and systems to help track the latest discoveries and facilitate new collaborations between industry and academia.

Prof. Sanjay Shakkottai is the Ashley H. Priddy Centennial Professor of engineering in the Electrical and Computer Engineering Department at UT Austin, where he also serves as Director of the Wireless Networking and Communications Group and an active member of D-STOP.

He received a PhD in Electrical and Computer Engineering from the University of Illinois at Urbana-Champaign in 2002. He is a recipient of the 2004 NSF CAREER Award and an IEEE Fellow. His current research focuses on network architectures, algorithms and performance analysis for wireless networks, and learning and inference over social networks.