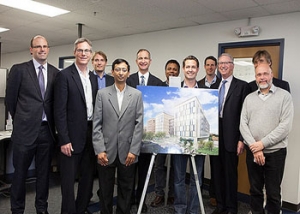 The Cockrell School of Engineering at The University of Texas at Austin has received a $2 million donation from Qualcomm Incorporated to create a new home for UT Austin’s Wireless Networking and Communications Group (WNCG). The new space will be located within the Cockrell School’s Engineering Education and Research Center (EERC), which is slated for completion in 2017.

In addition to housing the WNCG, the EERC will feature 430,000 square feet of open and flexible space for teaching, research and student projects, and it will include a 299-seat auditorium, a café and a state-of-the-art engineering library. The EERC will also be the new home of the Department of Electrical and Computer Engineering, the Cockrell School’s largest department consisting of 65 faculty members, 650 graduate students and 1,300 undergraduate students.

Qualcomm’s gift will fund the construction of the new Wireless Networking and Communications Group Research Neighborhood, where the WNCG and its 20 faculty members, 130 graduate and undergraduate students, and numerous research scientists and industry partners will continue to lead the way in innovative research related to wireless networking and communications.

Current WNCG research projects are focused on various technology areas that are transforming modern communications, including the development and enhancement of next generation wireless technologies, social networks, video processing and transportation.

“The Cockrell School is appealing to corporate partners because it has a culture that encourages creativity, innovation and interaction among all faculty and students,” said WNCG Director Robert Heath. “Thanks to this generous gift from Qualcomm, WNCG will have the space and resources to expand its collaborations across campus, which will lead to more research discoveries.”

Qualcomm is engaged in a variety of active collaborations with academia and is honored to work with WNCG to advance the technologies that are impacting the wireless industry. The company is committed to building strong relationships with universities across the globe. A longtime supporter of the Cockrell School and UT Austin, Qualcomm has provided student internship opportunities, as well as additional gifts to support the university’s Bill and Melinda Gates Computer Science Complex.

“Qualcomm is at the cutting edge of innovation,” said Ahmed Tewfik, chair of the Department of Electrical and Computer Engineering and a member of the WNCG. “Through the years, the company has collaborated with the WNCG and the electrical and computer engineering department because of the impact of our research and quality of our undergraduate and graduate students. We are grateful for Qualcomm’s continued support.”

Dr. Ahmed Tewfik is a professor in the Department of Electrical and Computer Engineering at The University of Texas at Austin.

Dr. Tewfik servedTexas ECE as department chair Fall 2010 through 2019. Tewfik brings to the Cockrell School an impressive research record, entrepreneurial insight as the founder and CEO of a software company and leadership gained through various positions with IEEE, the world’s largest professional association for the advancement of technology.