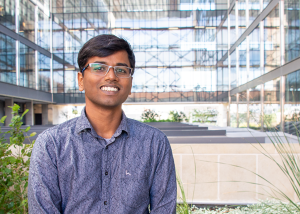 First-year graduate student Joshua Ebenezer has received the Nilanjan Ganguly Memorial Award for his undergraduate thesis on haze- and fog-affected images and videos. The award designates the “best B.Tech thesis in the Electronics & Electrical Communication Engineering Department” at IIT Khargapur and is given annually to a single student. The award also includes a cash prize for the recipient from the Ganguly family.

Ebenezer’s thesis addressed a very real problem: the number of traffic accidents caused by haze and fog. He developed an AI-based algorithm using a generative adversarial network, a deep learning model composed of two opposed networks. Ebenezer’s algorithm proved more effective than the current state of the art at clearing images obscured by fog; his work was presented at EUSIPCO 2019.

His thesis also featured another solution based on classical image processing methods on a digital semiconductor device called a field programmable gate array, or FPGA. This method allowed real-time removal of fog from videos.

New to WNCG starting Fall 2019, Ebenezer has been continuing his research in video processing as a member of Prof. Alan Bovik’s LIVE Lab. His current work is on developing a video quality assessment tool for live-streamed videos.

“I am excited about the research that I will be doing at WNCG,” Ebenezer stated, going on to cite the group’s strong research program and expert faculty as a “great opportunity.”

“I am looking forward to advancing the state of the art in video processing and machine learning and developing into an independent researcher and thinker.”