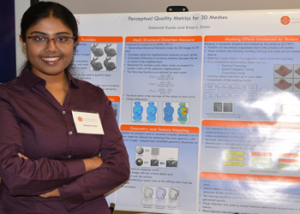 WNCG student Debarati Kundu and her advisor, Prof. Brian Evans, have been selected for a top 10% paper award for the IEEE International Conference on Image Processing 2015. The conference will take place in Quebec City, Canada in September. The paper "Full-Reference Visual Quality Assessment for Synthetic Images: A Subjective Study" deals with conducting a series of subjective experiments to aid in better understanding how humans perceive synthetic images encountered in computer graphics.

Measuring visual quality, as perceived by human observers, is becoming increasingly important in the many applications in which humans are the ultimate consumers of visual information. For assessing subjective quality of natural images, such as those taken by optical cameras, significant progress has been made for several decades. To aid in the benchmarking of objective image quality assessment algorithms, many natural image databases have been annotated with subjective ratings of the images by human observers. Similar information, however, is not as readily available for synthetic images commonly found in video games and animated movies. In this paper, the authors contribute primarily through conducting subjective tests on the publicly available ESPL Synthetic Image Database, and by evaluating the performance of more than 20 full reference IQA algorithms for natural images on the synthetic image database. The ESPL Synthetic Image Database contains 500 distorted images (20 distorted images for each of the 25 original images) in 1920 × 1080 format. After collecting 26,000 individual human ratings, the authors computed the differential mean opinion score for each image to evaluate IQA algorithm performance.

The complete paper can be found at: http://users.ece.utexas.edu/~bevans/papers/2015/imagequality/index.html