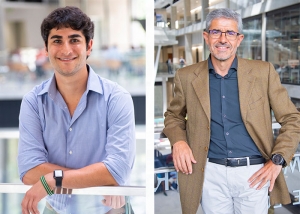 Most recently, he was a part-time research scientist at healthcare technology company Subtle Medical and a research associate at the University of California, Berkeley. Prior to that, he was a visiting scientist at GE Healthcare Israel, and interned at companies like National Instruments, Centaur Technology, and Arterys.

Joining WNCG is something of a homecoming for Tamir, who completed his undergraduate degree in Electrical and Computer Engineering at UT Austin before attending UC Berkeley for his Ph.D. During his time at UT, Tamir worked as an undergraduate research assistant with Prof. Ted Rappaport, WNCG's founder.

“As a former student, I am beyond ecstatic to have returned as faculty to the ECE department and to re-join WNCG,” Tamir stated. “WNCG has remained at the forefront of cutting-edge research at the intersection of communications, networking, and machine learning.”

Tamir leads the Computational Sensing and Imaging Lab (CSI Lab), which explores the joint design of computational sensing systems and software algorithms, with primary application to magnetic resonance imaging. This spring, he is also teaching an undergraduate course on signals and systems.

According to Tamir, WNCG’s “diverse and collaborative environment” is important to his research goals.

“WNCG's strong ties to industry are paramount to this work,” Tamir explained, “as we ultimately aim to translate our developments into clinical practice and reduce the healthcare burden.”

Millán has made a number of pioneering contributions to the field of brain-machine interfaces (BMI). His work on electroencephalogram signals and the design of brain-controlled robots has been particularly lauded. Some of his distinctions include the IEEE-SMC Nobert Wiener Award in 2011 and elevation to IEEE Fellow in 2017.

Millán comes to Texas Engineering from the École Polytechnique Fédérale de Lausanne in Switzerland (EPFL), where he helped establish the Center for Neuroprosthetics at EPFL and was Defitech Foundation Chair in Brain-Machine Interface. Previously, he was a research scientist at the Joint Research Centre of the European Commission in Ispra, Italy and a senior researcher at the Idiap Research Institute in Martigny, Switzerland. He received a Ph.D. in computer science from the Technical University of Catalonia, Barcelona, in 1992.

Prof. Millán and his research group will continue his work on the fundamentals of BMI and neuroprosthetic design, with an eye toward practical applications. Their priority is to translate the technology to be used by those suffering from motor and cognitive disabilities, in addition to offering new interaction modalities for able-bodied users.

“I’m thrilled to have the opportunity to collaborate with such a diverse and strong group of scholars in WNCG,” Millán said. “WNCG will certainly inspire my research program and facilitate the translation of BMI technology to daily use, and I hope to strengthen the group’s continuing impact.”

Jon Tamir is an assistant professor in the Department of Electrical and Computer Engineering at The University of Texas at Austin.