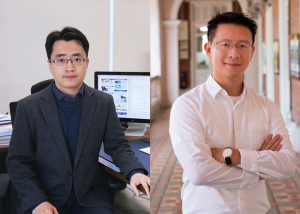 WNCG alumni Chan-Byoung Chae and Kaibin Huang have been elevated to Fellows of the Institute of Electrical and Electronics Engineers (IEEE) for 2021.

Chan-Byoung Chae is currently Underwood Distinguished Professor in the School of Integrated Technology at Yonsei University, Korea. He received the Ph.D. degree in Electrical and Computer Engineering from the University of Texas at Austin in 2008 under the supervision of Robert W. Heath, Jr., where he was a member of WNCG. He is Editor-in-Chief of the IEEE Transactions on Molecular, Biological, and Multi-scale Communications.

Chae’s research is centered on the fields of Integrated Technology, Wireless Systems, and Applied Mathematics. He has received a number of awards, most recently including IEEE WCNC Best Demo Award, the NAEK Best Young Engineer Award, and the Yonsei University Outstanding Achievement Award in Education, among others.

Kaibin Huang is an Associate Professor in Electrical and Electronic Engineering at the University of Hong Kong. He received the B.Eng. (first-class hons.) and the M.Eng. from the National University of Singapore; he received the Ph.D. from the University of Texas at Austin, where he was a member of WNCG advised by Jeffrey Andrews and Robert Heath. His research interests focus on the analysis and design of wireless networks using stochastic geometry and multi-antenna techniques.