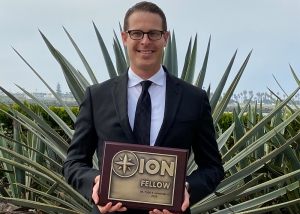 WNCG professor Todd Humphreys has received the Institute of Navigation’s (ION) “highest honor.” Humphreys was elected to the membership rank of Fellow at ION’s International Technical Meeting in January. He is one of only three recipients of the honor for 2020.

Humphreys’ election cited his “significant and fundamental contributions to PNT security and precise GNSS positioning for the mass market, and for dedication to GNSS education and outreach.”

He was commended for his “pioneering” research and publications, which have advanced the study of Global Navigation Satellite Systems worldwide over the past ten years. In particular, his 2008 paper “Assessing the Spoofing Threat” is one of the most-cited GNSS-related articles ever published. His research group was the first to demonstrate cm-accurate RTK positioning through a smartphone antenna, and in 2012 his group demonstrated the first successful spoofing of UAVs.

Humphreys has won numerous awards for his work, having most recently received the prestigious Presidential Early Career Award for Scientists and Engineers for 2019.

Humphreys directs the Radionavigation Laboratory and is the associate director of UT SAVES, an initiative launched by WNCG to address the challenges of wireless, networking, and sensing in vehicular systems. He holds the William J. Murray, Jr. Fellowship in Engineering and is an Associate Professor in the Department of Aerospace Engineering and Engineering Mechanics.