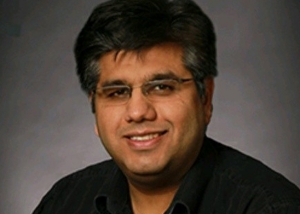 Monga received his Ph.D.EE from Texas ECE in 2005, advised by Prof. Brian L. Evans at WNCG. He now runs the Information Processing & Algorithms Laboratory at Penn State’s College of Engineering and holds the title of Associate Professor in the Department of Electrical Engineering and Computer Science.

The NTIRE competition was held at the IEEE/CVF Conference on Computer Vision and Pattern Recognition (CVPR) in June 2019. The event—one of the most significant events in the field of image restoration and enhancement—featured a number of challenge tracks, including image dehazing, image denoising, image super-resolution, image enhancement and image colorization. Of 275 registered teams, 22 were invited to the conference.

Monga, along with three Ph.D. students from his lab group—Tiantong Guo, Xuelu Li and Venkateswararao Cherukuri—won first place in the image dehazing challenge. The team was recognized during the conference and invited to present their work. Image dehazing has important applications not only in photographic quality, but also in autonomous driving and navigation.

Guo and Cherukuri, Ph.D. students advised by Monga, also comprised a separate team that participated in the challenge. Their work was awarded second place in the competition.