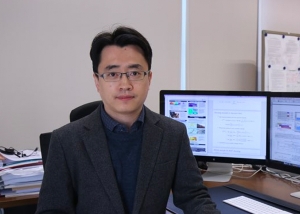 WNCG alumnus Chan-Byoung Chae has received the Young Engineer Special Award from the National Academy of Engineering of Korea (NAEK).

NAEK’s mission is “to discover and acknowledge engineers who have made remarkable contributions to the technological development in universities, companies, and research institutes, and to contribute to Korea’s creative engineering technology development through academic research and supporting projects.” To this end, the organization funds four different awards celebrating achievements and innovations in engineering: the NAEK Award, the Haedong Award, the Iljin Award, and the NAEK Next Generation Award.

The NAEK Award is bestowed on three beneficiaries a year via one main prize and two NAEK Young Engineer Special Awards, of which Chae is one recipient. These Special Awards honor influential leaders in engineering and technology—one winner from academia and one from industry—who are under the age of 50.

As one of the Young Engineer Special Award recipients, Chae will be celebrated with a certificate presented at the Spring NAEK General Meeting, as well as an honorarium of 50 million won (approximately $45,000 USD).

Chae is currently Underwood Distinguished Professor at Yonsei University in Korea, where he directs the Intelligence Networking Lab. His research spans the fields of Applied Mathematics, Integrated Technology, and Wireless Systems. He was won numerous accolades, and was recently appointed Editor-in-Chief of the IEEE T-MBMC.

At WNCG, Chae was supervised by Prof. Robert Heath.