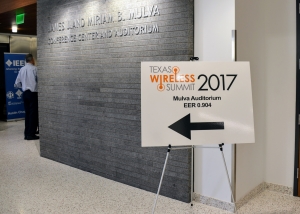 On November 6 and 7, WNCG hosted the Texas Wireless Summit (TWS). TWS is the group’s annual conference. TWS brings together leading figures in industry, academia, and government to discuss the latest developments in information systems technology. The theme for this year, “What Started Here Has Changed the Wireless World,” was a celebration of the 15 years since the creation of WNCG, founded by Professor Ted Rappaport.

Sessions and panels during the two-day summit explored cutting-edge developments in millimeter wave networks, the future of automated vision and navigation, software defined networking, theory and applications of machine learning and computation, and startups and entrepreneurship in the wireless space. The event also included a poster session, which allowed participants to take an inside look at current WNCG research projects.

The Summit welcomed over 300 attendees to the newly opened Engineering Education and Research Center (EER) at The University of Texas at Austin. WNCG relocated to the new space when it opened at the beginning of the fall semester. The move was a homecoming for the group, as the EER site once housed the Engineering-Science Building where WNCG began.

The Summit’s first session, titled “WNCG: The Last 15 Years and the Next 15,” focused on the history of the group. Panelists included current WNCG director Sanjay Shakkottai as well as all of the group’s previous directors: Robert Heath, Jeff Andrews, Gustavo de Veciana, and founding director Ted Rappaport.

WNCG “grew much more rapidly than I would have thought,” Rapaport said during the panel. “In 2002, it was after the dot com crash and Austin was suffering. Dallas had lost all [of] its Telecom corridor, and all of us got together…and schemed on how we could help change Texas and help the wireless world. That’s been a pleasant surprise to see how far we’ve come.”

In its first year, the research group comprised 60 graduate research assistants for 14 faculty members; since then, the group has expanded to over 200 current students and 22 active faculty members. In the intervening time, WNCG faculty have advised and supervised over 300 graduates and postdoctoral researchers combined. Upon leaving WNCG, alumni have gone on to influential roles in business, industry, and academia.

As part of the 15th anniversary celebration, the presenters and panelists for the Summit were all notable WNCG alumni. The 28 invited speakers hail from industrial and academic institutions all over the world.

Seeing the stage full of alumni was especially inspiring to the current WNCG students. For Mandar Kulkarni, a Graduate Research Assistant for WNCG, the opportunity to interact with influencers in the wireless field is the best part of TWS. It was even more meaningful at an event filled with former WNCG members.

“Meeting some of our alumni who are doing great in their respective fields after graduating was a privilege,” Kulkarni states. “Talking to [them]… made me really feel fortunate to be a part of UT, especially WNCG, which has produced so many amazing researchers.”

Graduate Research Assistant Chang-sik Choi shared the same opinion: “It was a wonderful event because we were able to meet old colleagues.” Choi was one of the students who presented his work at the poster session. He believes the opportunity was a “great chance […] to get helpful insight.”

WNCG students present their research during the TWS poster session

That experience is what TWS—and the research group in general—hopes to achieve. WNCG’s mission is to “create a collaborative environment that supports research, provides highly relevant education and opportunities, promotes technical innovation, imagination and entrepreneurship in wireless networking, communications and data sciences.”

With the close of the 2017 Summit, WNCG is looking towards another year of innovative research in wireless and related fields. "It was a wonderful experience to have so many of our alumni return and speak about their work since leaving UT," said Jeff Andrews, former WNCG Director and co-chair of this year's TWS. "Their accomplishments are awe-inspiring to witness, and really bear out UT's motto 'What starts here, changes the world'.  And with the momentum and global visibility WNCG now has, we are confident our impact in the next 15 years will be even more consequential."

The success of TWS 2017 was made possible thanks to the generosity of sponsors Holland & Knight LLP, Norton Rose Fulbright, RCR Wireless, and IEEE Communications Society.

If you weren’t able to attend this year’s Summit, videos and presentation slides from the sessions, as well as more information can be found here: http://texaswirelesssummit.org/past-events/