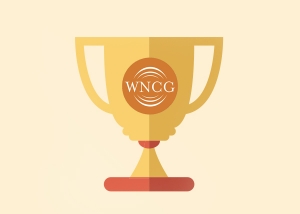 Every Spring, Texas ECE’s Awards Banquet celebrates the achievements of the department’s outstanding students and faculty. Three WNCG members were among those honored at this year’s event, which was held last week on May 6.

WNCG Student Ahmed Kord won the prestigious Graduate Student Excellence Award for 2018-2019. The department confers this prize annually on one graduate student who has demonstrated “high academic achievement in the Department of Electrical and Computer Engineering.”

Kord has been with WNCG since 2015 as a member of Prof. Andrea Alù’s Metamaterials & Plasmonics Research Laboratory. The team works to develop “new concepts and circuit architectures for magnetless circulators based on spatio-temporal modulation (STM) of resonant three-port junctions.” Kord’s research has won various awards, including the IEEE MTT-S Graduate Fellowship, the IEEE MTT-S Design Competition, and the Qualcomm Innovation Fellowship.

Kord graduates this semester with his Ph.D., having successfully completed his thesis defense in April on the topic of “Magnetless Circulators Based on Linear Time-Varying Circuits.”

Also honored at the banquet was WNCG faculty member Brian Evans, one of only four ECE professors recognized for Excellence in Teaching by the Undergraduate Advisory Board. The distinction commends “a consistent display of care and excellence in and out of the classroom.”

Prof. Brian Evans was one of four ECE faculty recognized for Excellence
in Teaching by the Undergraduate Advisory Board.

Since joining Texas faculty in 1996, Prof. Evans has received a number of teaching commendations, including ECE’s Gordon T. Lepley Memorial Teaching Award in 2008 (the department’s sole teaching award at the time); the university-wide Texas Exes Teaching Award (2011); and Best Professor Award from the UT Austin HKN/IEEE Student Chapter (2012). This is his second time to receive the Undergraduate Advisory Board’s Excellence in Teaching distinction—he was also selected for the honor in 2018.

Winners of the ECE Capstone Design Showcase were also announced at the Awards Banquet. WNCG professor Andreas Gerstlauer’s senior design mentees won third place in the Showcase’s Honors/Entrepreneurial Category. The group presented their project, “Deep Learning Hardware Accelerator,” at the Showcase the week prior as the culmination of a yearlong research project working closely with Prof. Gerstlauer.

Congratulations to Dr. Kord, Prof. Evans, Prof. Gerstlauer's undergraduate senior design team, and all of the winners at this year’s Awards Banquet!

Dr. Andreas Gerstlauer is an Associate Professor in the Department of Electrical & Computer Engineering at The University of Texas at Austin.